Make use of the leeway: Communicating Europe in non-formal civic education 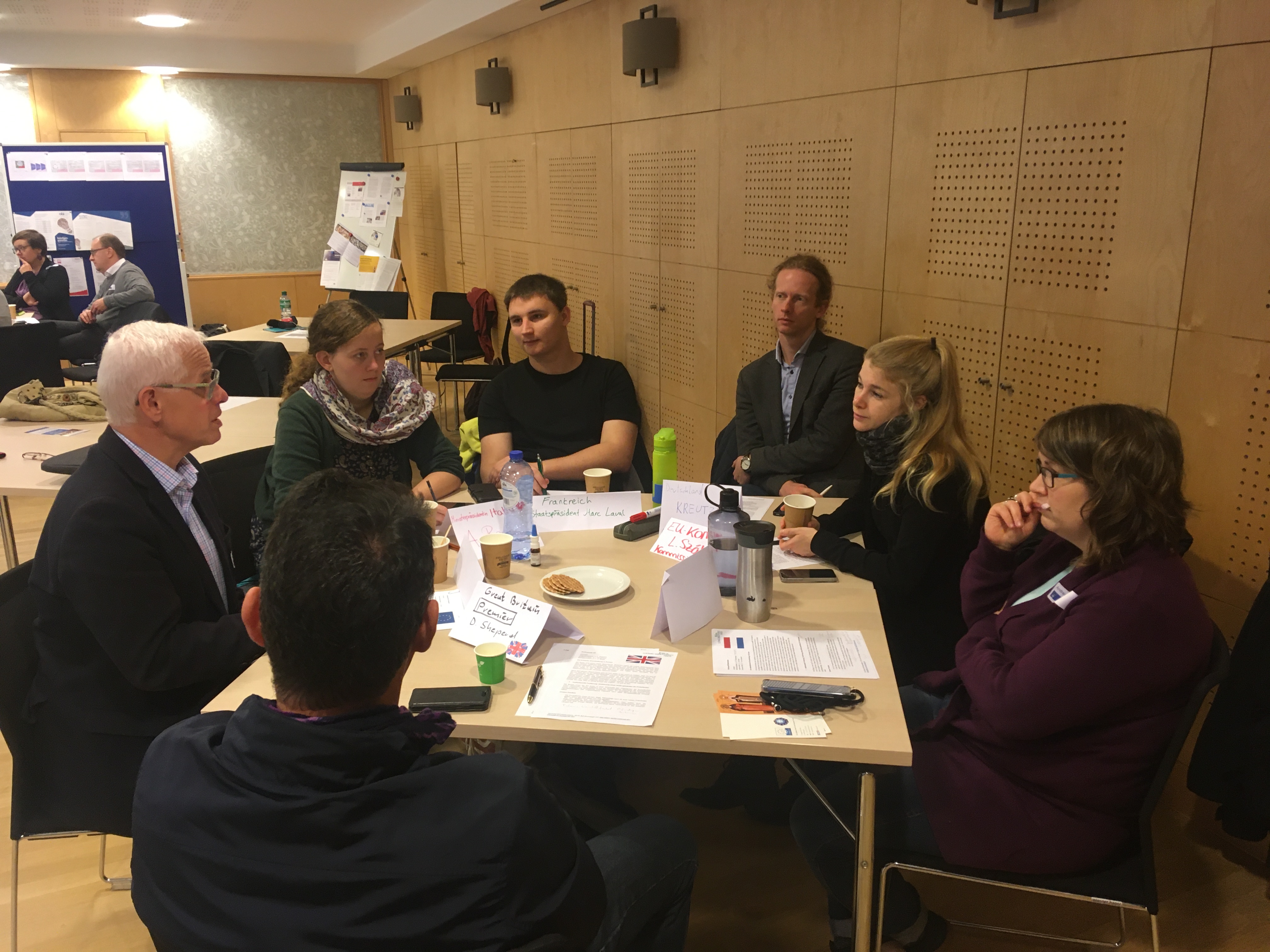 The sentence “I think of Europe at night I am deprived of sleep” is a quotation from the former Foreign Minister Joschka Fischer. What the quote puts in a nutshell: Europe is not a very simple continent. Because Europe can sometimes be somewhat complicated, it is only logical that the European Union also has a certain complexity.

For civic education this results in challenges: The EU consists of a multitude of actors with different roles and meanings. In addition, the EU deals with a variety of topics and not all of them are equally interesting. Who wants to know the details of, for example, Regulation 883 on the coordination of social security systems?

But how can the EU be communicated successfully? What constitutes well perceived educational events? Every year, the European Office and its sponsors organise specialist events at which a large number of actors in political education exchange their experiences and work out important criteria for successful EU education.

Participants and speakers at the conferences and workshops showed a clear preference for event formats that allow learners to experience multiple layers of learning. These educational formats include above all excursions and study trips, multinational meetings and political simulation games. The various multidimensional approaches to teaching Europe have two things in common: Firstly, they aim to reach their audience not only on a cognitive but also on an emotional level. On the other hand, the learners do not only receive, but actively carry out actions.

Study trips and excursions to Brussels and Strasbourg are a popular method. Even those who associate not only positive feelings with the EU are often curious to see the EU institutions at close range and to speak personally with members of parliament or staff of the European Commission. It can create trust to see buildings and people with your own eyes. It can also be instructive for professionals to get a first hand impression.

If you enquire early enough, it is usually possible to make an appointment with an MEPs´Office or an official at the European Commission. In Brussels, the Parliamentarium, the official museum of the European Parliament, attracts visitors with a multimedia exhibition on two floors and 360-degree cinema. Since its opening, 2 million people have visited the Parliamentarium. The House of European History is also a destination well worth seeing. Visitors will find a large exhibition with many original exhibits on the different periods of European history. The quality of the excursion programme can be enhanced if a particular topic of EU policy, in which the target group is particularly interested, is chosen as the theme of the event. The intensive debates on the general data protection regulation, on the subject of refugees and migration or the European Green Deal and climate protection show that there are a large number of EU topics that attract public attention and interest. If a historical perspective is preferred, trips to Verdun, Schengen or Waterloo are also suitable.

In research, too, “exemplary learning” is preferred. Concentrating on a specific policy area or even a concrete controversial issue makes it possible to reduce complexity and thus facilitates access and in-depth discussion (Grammes 2004). On excursions it also makes sense to avoid a projection of German perspectives on the EU, as well as the trap of sightseeing tourism. Therefore the interlocutors should belong to different nations, parties and EU institutions and the excursion should include learning phases with seminar work (Weber 2015).

Europe is not just about politics. An important aspect is the encounter with other Europeans. One format that focuses on experience and activity in a special way is the European Youth Weeks (EYW) as they are held in the Haus am Maiberg in Heppenheim, Hesse. For 25 years, about 50 participants from 10 partner countries have been coming together once a year for 14 days of living and learning together. The aim of the EYWs is to make Europe tangible as a space of experience and to question the nation as a decisive criterion of group membership. Often you have much more in common with people who live in other countries than with your own neighbours. Often the participants* shared personal experiences, interests, personal characteristics, preferences and hobbies. By getting to know each other, the participants of the Youth Weeks quickly find out that others are also city dwellers, ride motorcycles or have grown up with one of their parents. Thus new group memberships were formed. In order to create the personal level, the Living Library method is used. The goal of stimulating the participants’ self-reflection can be achieved by creating identity molecules.

Due to the relatively long duration of the events of two weeks and the living together of a mixed-national group in the conference house a particularly intensive getting to know each other is possible. Through the group dynamic processes that occur, emotions on political topics can be expressed openly. The duration of two weeks enables the trainers to carry out extensive activities. The European Youth Weeks are seen as very positive in their effect on the participants.

Political simulation and business games have existed as a method for a long time. In a simulation game, the participants take on the roles of political actors for a limited period of time and negotiate, for example, a legal act. Some actors in civic education consider the usefulness of using simulation games to be low. Playing games is still afflicted with the stigma of a lack of seriousness in some of the trainers. However, the positive effects of simulation games on the learning success of participants are now well established in civicl education research (Hartmann & Weber 2013, Oberle & Leunig 2018, Dierßen & Rappenglück 2015). Numerous positive experiences with simulation games are also known from practice. The Akademie Klausenhof in Hamminkeln, the Ludwig-Windhorst Haus in Lingen or the BDKJ of the Diocese of Osnabrück are three institutions that have been successfully using simulation games and other playful approaches in political education for a long time.

All people have a natural instinct for play. This makes it possible to introduce people to complicated political processes in an entertaining way and to arouse interest. By taking on different roles, participants get to know the different actors of the EU in a memorable way. The negotiation of legislative proposals of the European Commission is often the subject of EU business games. Dealing with the topic trains the participants to become familiar with political issues. Negotiations with the players train the ability to argue. Participants often experience very quickly how difficult it can be to find compromises in political negotiations. This creates a better understanding of the work of political actors. The situation of the game and the competition with the other players* increases the motivation to get involved in complicated contents or procedures.

The testing of a business game at the symposium in December 2019 showed how quickly the players are absorbed in their roles and how interesting political dynamics develop. Although the participants were fully aware of the game situation, a compromise on the EU’s nuclear phase-out, for example, could only be found in intensive renegotiations.

Of course, political simulation and business games cannot fully reflect reality. In order to prevent the players* from getting the impression that the EU is exactly like the game they experienced, it is important to embed the experience in a good preparation and follow-up. A business game that has aroused interest can serve as an introduction for a more theoretical input on structures and processes in the EU.

Excursions and study trips, youth meetings and political simulation games can be funded through Erasmus+, the EU’s education programme.

After the 2019 European elections, the EU has moved somewhat behind in public attention. This does not make the issue any less relevant. It is therefore important to maintain and deepen the interest by using proven and innovative methods. By dealing with topics that are of current interest to citizens, contributions can be made to socio-political debates.