On the implementation of Next Generation EU in Germany and Europe 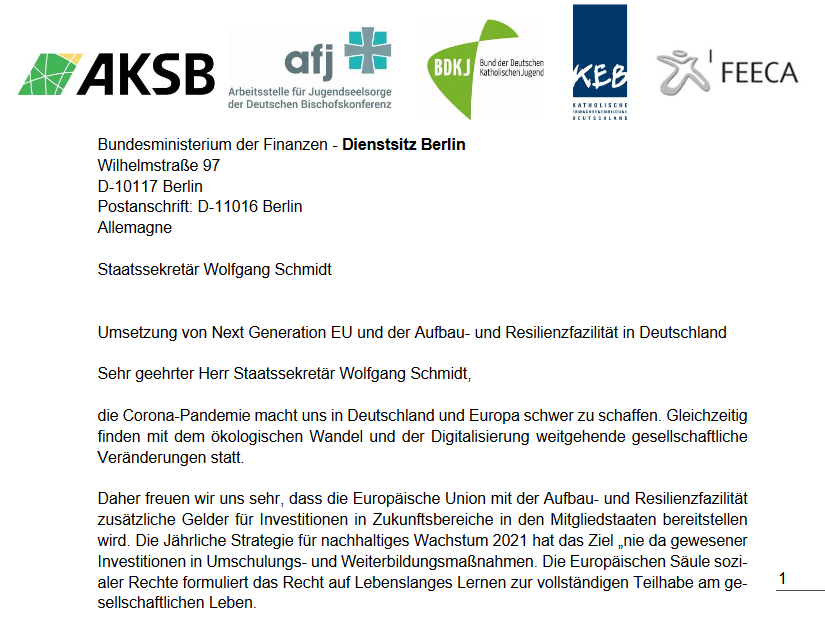 The Organisations for catholic youth and adult education represented in the European Office have published a statement on the implementation of Next Generation EU. Next Generation EU is a new EUR 750 bn. programm to support Member States financially during the COVID-19 pandemic. The Recovery and Resilience Facility within Next Generation EU is intended to mobilise investments in areas of sustainable growth. According to European Commission documents, support for territorial and social cohesion as well as successful green and digital transitions  are the most important objectives. Investments in youth and adult education are intended to support achieving those goals. The Recovery and Resilience Facility provides EUR 22 bn. to Germany. Contrary to the European Structural- and Investmentfonds, the financial means mentioned have not been transferred to the EU-budget by national governments. The European Commission will finance the newly created recovery fund by issuing government bonds at the capital market.

The European Office has send the new policy position to several key figures within the EU-Institutions as well as the German government. These are among others Wolfgang Schmidt, undersecretary at the federal ministry of finance, EU-Commissioner Valdis Dombrovskis and Sabine Verheyen head of the committee for education at the European Parliament.

In the following you can read the complete statement:

1. Climate change: Recent studies have shown that far-reaching changes are required to
avoid the worst effects of climate change. Germany alone, as the largest economy in the EU,
must save 60 to 70 megatons (MT) of CO2 per year by 2035 and achieve an annual increase
in renewable energies of 40 gigawatts (GW). Experts indicate that these tasks can only be
achieved with broad social approval and participation. (Wuppertal Institute, 2020, p. 10ff). Scientists from the Wuppertal Institute for Climate, Environment and Energy and Fridays for Future activists agree that youth and adult education have a major role to play in the fight against
climate change.

2. Digitization: Digitization is changing the world of work and the dissemination of information
and opinions on politics and society. Since 2016, extensive disinformation campaigns on digital
media have targeted political and social events such as election campaigns or the current
corona pandemic. Studies recommend improvements in media literacy as well as strengthening analytical and critical thinking in people at risk as an effective means of combating fake
news.

3. Nationalism: Right-wing nationalism, right-wing populism and attitudes of group-focused
emnity have returned as politically relevant forces. In many European countries, right-wing
populist and nationalist parties continuously achieve double-digit election results. Political or
citizen education is a tried and tested tool to counter nationalism. After the Second World War,
political education played a central role in curbing the old national thinking and anchoring democracy and openness to the world.

4. The corona pandemic: The corona pandemic has dramatic effects on the health of the
sick. Empirical evidence shows a wide range of indirect negative effects for example on mental
health among young and old (German National Education Report, 2020, p. 230). In addition,
the crisis poses new challenges for democracy (16th report on children and young people of
the German Federal Government, 2020, p. 88f). The positive impact of non-formal education
on mental health is well document. Recent research shows providers are living up to this expectation and are delivering effective support to people struggling with the impact of COVID19.

To support Member States with the current societal challenges, the European Union is aiming
to introduce a development and resilience facility with the help of which EUR 672.5 billion is to
be made available to finance reforms and investments in the member states. The overarching
objectives are to strengthen territorial and social cohesion and to successfully shape ecological
change and digitization. The official documents on the Recovery and Resilience Facility published by the European Commission identify education and training as policy areas relevant to
the context.

To receive funding from the Development and Resilience Facility, member states must present
National Reform and Resilience Plans (NRRPs). The reform and investment plans must contribute to the implementation of seven European flagship initiatives outlined in the annual strategy for sustainable growth. The flagship initiative “up- and reskilling” formulates the goal of
“unprecedented investments in up- and reskilling. The member states are called upon to involve civil society actors effectively in drawing up their reform and investment plans.
Recommendations for the implementation of the development and resilience facility
The organizations represented here welcome the introduction of a development and resilience
facility by the EU. For the implementation, we would like to make the following recommendations:

1. Sustainable use of funds from the Development and Resilience Facility: The Member
States will receive around EUR 300 billion in grants from the EU’s Development and Resilience Facility. For the first time, the European Commission will have the authority to raise
funds on the capital markets. This money represents additional resources for national
budgets and thus offers the great opportunity to meet the existing social challenges through
additional investments. We recommend that the funds from the development and resilience
facility should not be used to refinance expenses already taken. According to current information, there are Member States that have plans to do so. We recommend using the funds
for additional investments in territorial and social cohesion and education as described in
the documents of the European Commission. We ask the European Commission and the
European Parliament to monitor and scrutinize the NRRPs, to ensure that real investments
in sustainability related sectors are taken.

2. Involve civil society and use the available time: We live in times in which organised civil
society is under pressure in Europe and worldwide. In its recommendation documents on
the Development and Resilience Facility, the European Commission calls on the member
states to involve civil society organizations in drawing up the national reform and investment plans. In an open letter to the EU institutions, the umbrella organization of European
civil society, Civil Society Europe, criticizes the fact that the recommendation of the European Commission to include civil society has so far received little attention from national
governments. The deadline for submitting the National Reform and Resilience Plans is
April 15, 2021. National governments should use the time available to create sustainable
and beneficial NRRPs in cooperation with organised civil society. We ask the European
Commission and the European Parliament to insist on the actual involvement of civil society organisation. Through this the EU would send a strong and exemplary signal for a
strong and lively civil society.

3. For a consistent and holistic policy on re- and upskilling: A skills policy that reacts
quickly and effectively to new developments on the labor market is of central importance
in times of digitization and ecological change. Documents such as the 16th report on children and young people of the German Federal Government or the Paris Declaration by the
EU Education Ministers provide an impressive analysis of the fact that the social challenges
mentioned extend far beyond the labor market and affect all areas of life and of all age
groups. In addition to lifelong learning with a professional focus, complementary lifelong
political education must be established for everyone as a standard element of national and
European skills policies. National skills strategies, the documents of the European semester and of the European Commission should make lifelong political education a central part
of their measures, analyses and recommendations.

In the name of our organisations